For the Nutcracker Theme this month, I stitched Durene Jones Christmas Owl which was a freebie on her Facebook page. 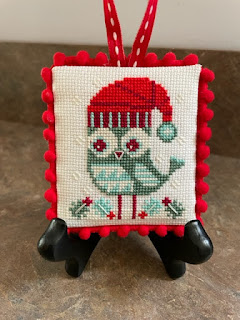 I left off the border to finish with the pom-pom trim that I love. I'll have to fix that right top corner :)
Since I didn't work on my Nutcracker Sampler, I finished Three French Hens by Gazette 94. 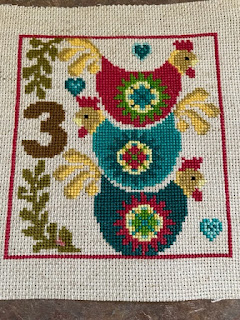 I want to stitch all of the first six days before I finish them as I have an idea for a banner. Not a terrible amount of stitching for me this month.
Happy Stitching!

I was happy to find some ornaments I really wanted to make that matched the May Nutcracker theme of Trees and Presents! Here are my Victoria Sampler "Biscornuments" (ornaments in the shape of a mini biscornu) 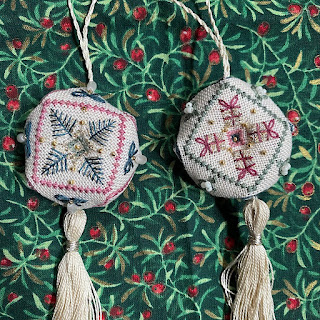 The stitching on these doesn't take long, but the finishing is fiddly! I feel like I have hotdog size fingers when I'm stuffing them! Anyway, I had already made a couple of these from the booklet of 5 designs, and gave them to my mom. Now I am remaking the whole set for me! At that time I went ahead and made all the tassels and hangers and boy am I glad I did that, because it does speed up the final finish quite a bit, and gives the set more uniformity. Hooray for planning ahead!

I guess I should have waited a couple more days...haha.  I didn't expect to finish up my June ornaments so quickly.  Sorry for posting so soon.  First is the 12 Days of Christmas theme...I stitched 6 Geese-a-Laying from the book 2001 Cross Stitch Designs.  This was stitched on 32 count ice blue linen over two.  I do love how these are turning out! 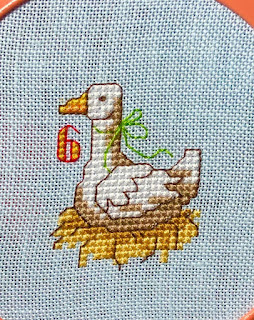 Next is the designated year from the JCS Ornament issues...this month was 2006.  I chose Mary and Joseph by Shepherd's Bush.  Stitched on 40 lambswool over two with substituted DMC threads.  This was a fun stitch! 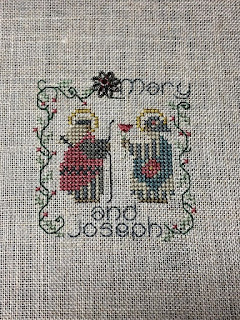 And last is The Nutcracker theme with Owl being our subject this month.  I chose a pattern called Christmas Cross Stitch #7 by The Floss Box.  Anyone who knows me will know that I love owls...so I had quite a few in my pattern collection.  I've always wanted to stitch this one.  I did omit the border because I want to finish this as a round ornament.  I also changed the color of the moon from white to yellow.  It just didn't look right the other way around.  It's stitched on 40 count Summer Khaki over two. 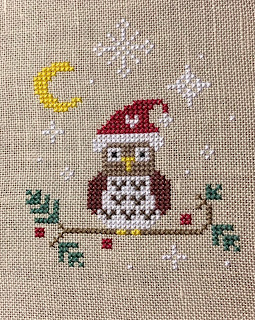 So...I guess that's it for this month.  See you next month (Lord willing and the creek don't rise).  Happy Stitching!

Whew...where does the time go?  I have been watching my granddaughter twice (sometimes three) times a week for a few months now and my stitching has fallen waaaay behind schedule.  I've been working hard to catch up...but it's also left little time for posting.  But...here I am to show what I've been doing for March, April and May.  Hopefully I'll be back soon with a June update too!  Fingers crossed!  I was working on all four of the challenges this year, but couldn't find patterns I liked for some of the "Christmas" movie category so I've dropped out of that one this year.  So...here are the other three.

First off is 12 Days of Christmas.  I have been stitching from the 2001 Cross Stitch book I love this book and use it often!  Here are 3 French Hens 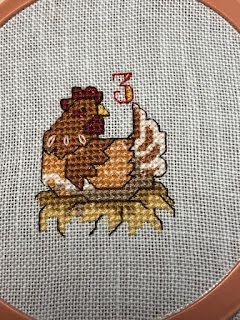 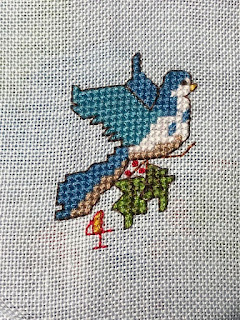 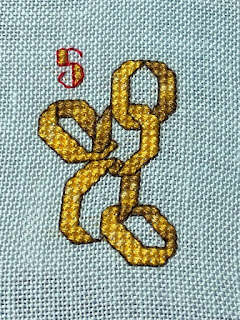 Next category is ornaments from the Just Cross Stitch ornament issues for the year selected.  March was 2012 and I chose Peace Pin Button by Jeanette Douglas 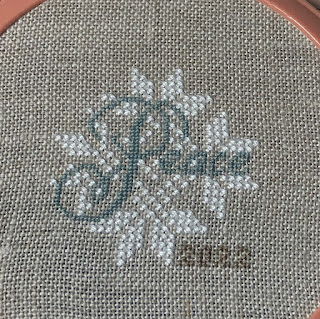 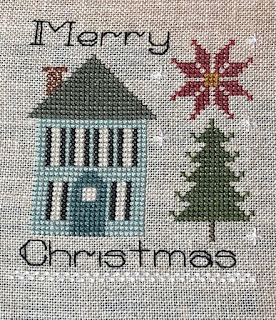 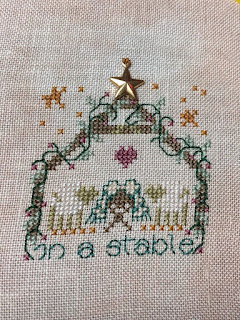 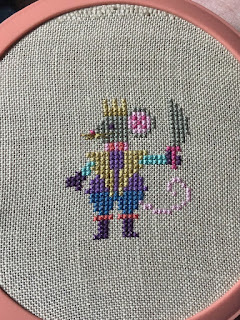 April was a Free Choice so I chose the Swan from the same serries in TWOCS. 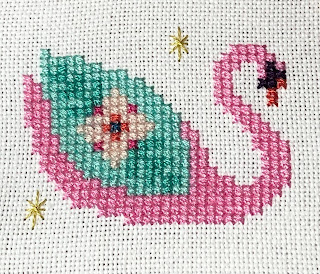 May was Christmas Tree/Presents so I chose Perfect Gifts by Full Circle Designs from the 2004 JCS ornament issue. 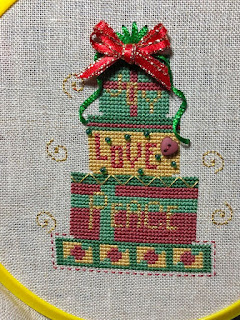 Hopefully I'll be back soon with the June stitching.  I already have one done...but I like to group them together.  Happy Stitching everyone!

Oh Oh! Just realized I typed my post for April but never published. Yikes! What I stitched for my Free Choice was Yule Flower, La-D-Da. This was an ornament from Just Cross Stitch Ornament issue 2004(?). ( I think.) 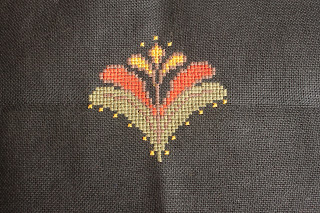 Yule Flower
La D Da, JCS
For May, I have a FFO. This doesn't happen very often. I stitched 5 Rings, an ornament from Celebration of Needlework's 12 Days of Christmas SAL. I used the items from the kit for stitching and finishing. 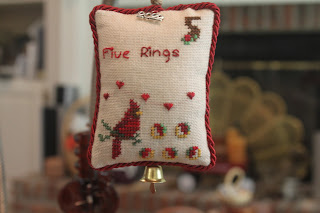 Hi everyone! I'm glad I made it before the end of the month!

Here's my progress on the Nutcracker Sampler. I've finished the tree and presents to fit the theme this month. 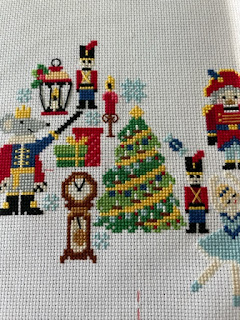 I worked on a couple of more trees to fit the theme. Country Cottage Needleworks - Merry & Bright from the JCS 2010 Ornament issue. I changed the pinks to reds. 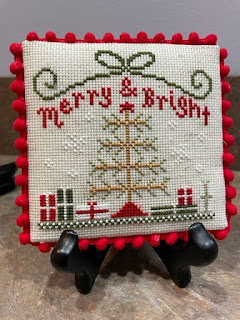 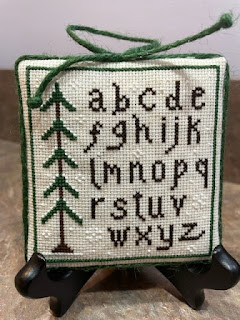 I've set this under a book to see if the cording will flatten down.
I also worked on Theme Three - JCS 2004. I want to make two of these for my nieces. Gentle Pursuits Designs - Christmas Eve in Old Salem. I want to finish the second one before I fully finish them. 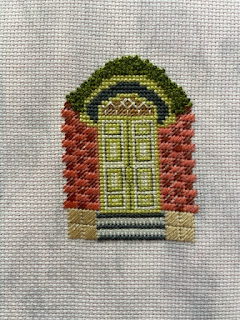 I think I'm going to straighten this out a little when I finish it. The picture shows the distortion in the stitching.
That's it for me this month. I hope you all are well and stitching lots of fun things! 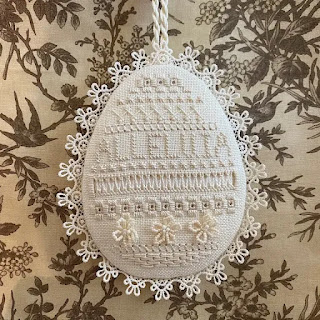 I took advantage of the free choice this month to do something that is not really a Christmas ornament, but one for Easter! Well, it could work for Christmas too. It is so pretty I will probably leave it out year round for now! The design is from Cross Stitch and Needlework magazine, April 1998. It is a contest winning design from a subscriber. What a talented person! No wonder it won! I loved stitching it. The variety of stitches was fun. It was charted to say ABC 123 but I changed it to Alleluia which fit perfectly. I was happy to find some really good lace to coordinate for the trim. I will get back to something more Christmas-y next month!

THE NUTCRACKER
January - Nutcracker/Toy Soldiers
February - Sugar Plum Fairy
March- Mouse King/Mice
April - FREE CHOICE
May - Christmas Tree/Presents
June - Owl
July - Rosebuds/Flowers
August - FREE CHOICE
September - Hares
October - Snow Queen/Snowflakes
November -Gnomes
December - FREE CHOICE
OR, YOU COULD STITCH CCN'S NUTCRACKER VILLAGE (which is on my To Stitch List for 2022).... and....Remember: You can choose to stitch any of the four themes or ALL of them or dip in and out of any of them on any given month. Just have fun! 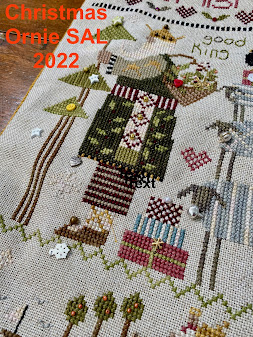 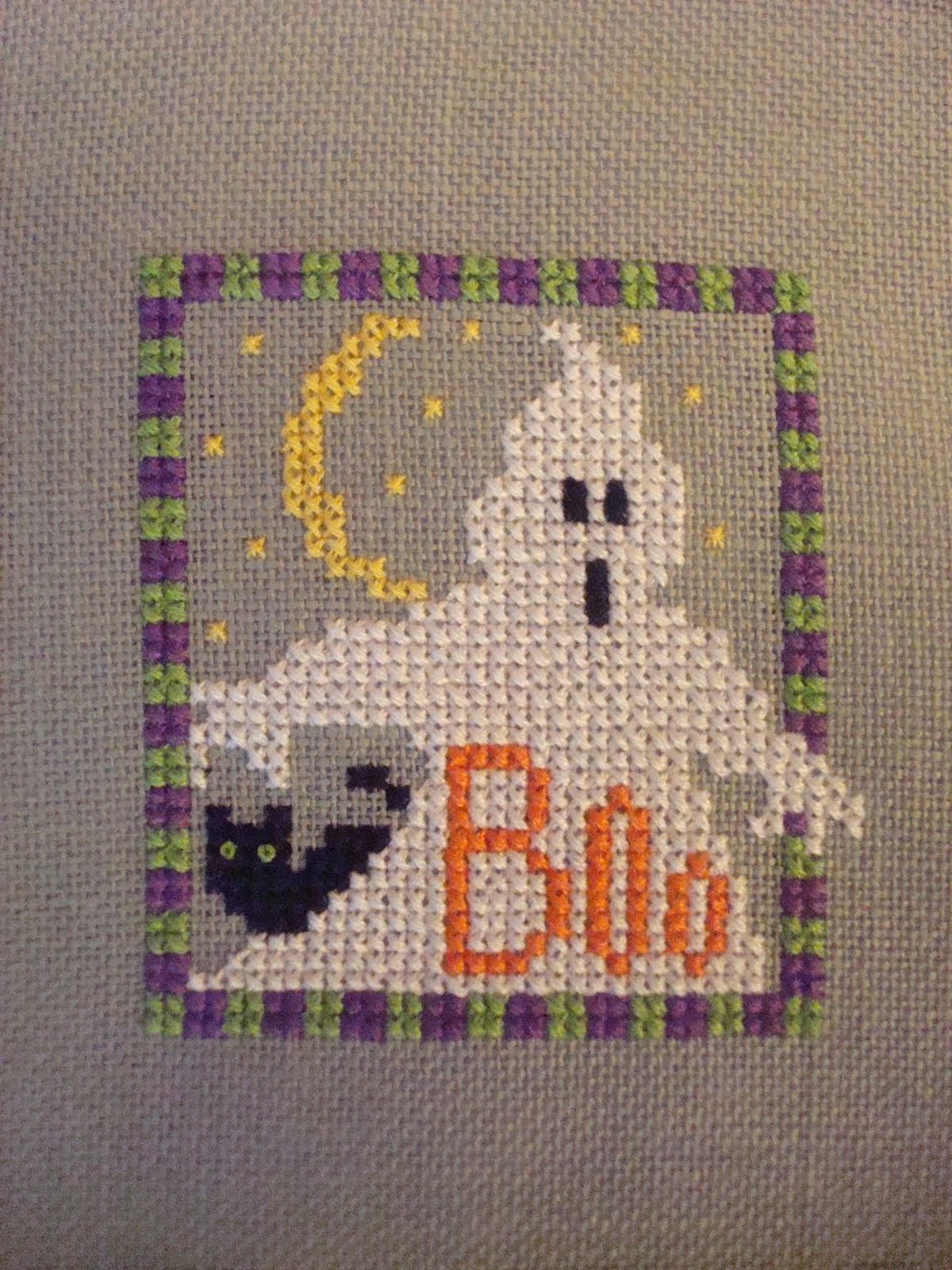